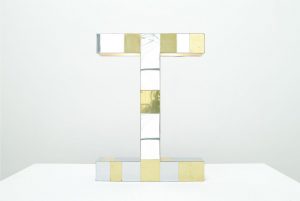 Paul Evans (1931 – 1987) was an American born furniture designer, sculptor, and artist, who is famous for his contributions to American furniture design and the American craft Movement of the 1970s, and with his work with the influential American manufacturer Directional Furniture. His creation of metal sculpted furniture set him apart. He studied at the Cranbrook Academy of Art and later settled in New Hope, Pennsylvania, and shared a showroom with woodworker Phillip Lloyd Powell.

Evans began, in the 1950s making copper chests and followed with sculpted steel-front cabinets. Evans had a two-man show in 1961 at America House, an exhibition held at the Museum of Contemporary Crafts in New York (now named the Museum of Arts & Design).

Evans pieces were frequently signed, and some of the custom items have a signature and a date. Paul Evans’ combination of handcraft and technology anticipated the limited edition art furniture of today. The artist’s relationship with Directional Furniture set a unique standard for creative manufacture by insisting every piece is made by hand, finished by hand, supervised by the artist at each step of production, one piece at a time.