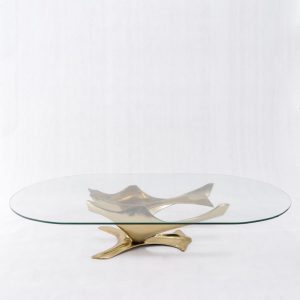 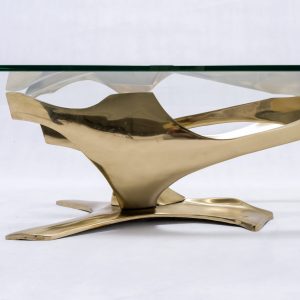 Fred Brouard was renowned in his time for bringing unique curves, striking finishes, and bold designs to the fore of late 20th century furnishings, lighting, and jewelry. As versatile as he was skilled, his body of work grew to include sconces, pendants, sculptures, and even large pieces of furniture such as dining tables. Well known as an exhibitor throughout his prolific career, many pieces survive today as a testament to his malleability as a sculptor.

Born in Normandy in 1944, Brouard first attended the Ecole des Beaux-Arts de Rouen, then the prestigious Ecole Nationale Superiure des Beaux-Arts in Paris. He began working in plaster to make his own art.

Having moved on to metal, he went on to open his own workshop in 1973, and throughout the 1970s exhibited in France, participating in the Great Exhibition – Youth of Today (1974), the Biennale of Padua (Lausanne, Switzerland, 1975), and the International  Exhibition of Vaudreuil (1978). Into the next decade, Brouard showed his work in Saudi Arabia and at the prestigious Salon d’Automne in Paris.

Though Brouard passed away in 1999, his work is still recognized as an important contribution to late 20th century design. His work can today be found in the collection of the National Fund for Contemporary Art in France. In addition to this, his pieces are fixtures in the private art market.